Thanks, But First... A Hindu Reformed Church
(A Christian Response to the RSS Appeals)

©Lucio Mascarenhas, 4th October 2000.
Orthopapism II/Michaelinum | Index of Articles
Recently in this month, the RSS chief Mr. K. S. Sudershan made many times an appeal to the Indian Government and to Indian Christians to break Indian Christianity from foreign contacts and establish a state-controlled and sanitized pro-Hindu schismatic sect. As an Indian Christian, I am very grateful to Mr. Sudershan and his tribe for the concern they show for us. However, I believe it to be entirely misplaced. India does not suffer from any nuisance caused by Christians, whether Indian or foreign, except in the jaundiced minds of idiotic half-panted wannabe Hitlerite poltroons, 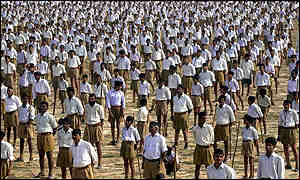 but suffers really from the monstrosities of Hinduism’s caste system – which has even overflowed and infected the other, even egalitarian religions. It is this that needs the attention, even urgent attention, of the Indian state.

In India, we have had this indigenous nazism, this Indian apartheid for two thousand years and more. In this time, its victims have not only be brutalized and debased, but even brainwashed into accepting this condition. On the other hand, the self-styled ‘caste’ Hindus – the beneficiaries and sustainers of this most monstrous of things in Indian history have monopolized land and about everything else, except the jobs considered demeaning, which they have reserved for their victims, and gorging themselves on the best of the land, have grown fat and sleek, the while ranting about the lack of culture and hygiene of their victims, Also, their temples have grown rich and fat on this same plunder.

Obviously, it is this problem that needs to be addressed. Affirmative action has been a great failure, and it has not addressed the root causes of the problem, allowing the evil to continue and to even comeback. Therefore what India needs, and desperately, is a state forced reform of the Hindu religion to entirely extirpate the caste system. The state needs to set up a state-sponsored and controlled, sanitized Reformed Hindu Church, in which the obscurantists, purveyors of irrationalities and superstitions, are systematically suppressed.

We can learn, as Sudarshan so lovingly desires, from the Chinese Communists. We will need re-education camps, concentration camps for the recalcitrants, pliant reformists, the merciless rooting out of Manuwad and Dvijwad, the confiscation and redistribution of lands and other properties of the reactionaries and their temples, their disarmament and strict exclusion from Public Offices, the empowerment of their victims, the formation of communes and a program of Reparative Community Service as a means for the rehabilitation of the criminals, etc., etc.

This is the real program for reform that India needs, one that will benefit both India and all humanity, and one to which Indian Christians will gladly and happily offer their fullest co-operation and support.

Finally, I wish to point out that while foreign Christian missionaries have made very great contributions to India’s modern development, the foreign converts of Hinduism have made none except evil, and if any are to be expelled and excluded, it is these... Further, whether Indian Christians want their foreign fellow believers to join them here is not the concern of the Hindus or anybody else, but if they are so concerned, let them, in keeping with the adage, "Charity begins at home," recall THEIR missionaries from foreign lands. This is a challenge!